Enjoyable but killer is too obvious 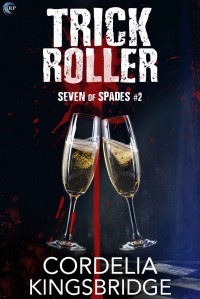 It’s the height of summer in Las Vegas. Everyone believes the serial killer Seven of Spades is dead—except Levi Abrams and Dominic Russo—and it’s back to business as usual. For Levi, that means investigating a suspicious overdose at the Mirage that looks like the work of a high-class call girl, while Dominic pursues a tough internship with a local private investigator. The one bright spot for both of them is their blossoming relationship. But things aren’t so simple. Soon Levi is sucked into a dangerous web of secrets and lies, even as his obsession with the Seven of Spades intensifies. Dominic knows that Levi isn’t crazy. He knows the Seven of Spades is still out there, and he’ll do anything to prove it. But Dominic has his own demons to battle, and he may be fighting a losing war. One thing is certain: the Seven of Spades holds all the cards. It won’t be long before they show their hand.

This is book two of the presumably five book series (that’s how many I saw advertised by Riptide Publishing). Actually, I still doubt that these books count as separate books in the series, because to my mind the book in the series has to have *something* resolved while overarching story is only going to be resolved at the end.  There were some murders in book one and book two where we learned who did it at the end of book one and book two , but I just don’t know, I guess I still did not feel that anything important was resolved.

Dominic and Levi are working on their relationship and they were stronger at the end of this book than at the end of book one, which made me very happy, however I just did not feel that they achieved any milestones yet so to speak, therefore while the ending of this book did not offer any cliffhangers in their relationship, it felt like it was developing and there was no satisfactory place to stop.

As to suspense/mystery storyline, Seven of Spades feels like the main story and the individual murders that take place all seem to be connected one way or another to our mysterious killer, that’s why even though individual murders were resolved, I did not feel like they were if it makes sense.

But I am running ahead of myself. The second book fast forwards three months and we see Levi and Dominic deciding that they waited long enough to make sure Levi was not jumping in the new relationship too fast after his break up with the ex- boyfriend and they want to spend the night together. They were not completely celibate, but their sex was brief and kind of reminded casual encounters. I took it that they both enjoyed themselves very much during the “spending the night” event.

As blurb tells you Levi and his partner Martine in this book investigate an overdose in the “Mirage” which ends to be a homicide and initially the woman whom they arrest is the woman from high class escort agency, and soon it becomes clear that somebody is trying to frame her for murder. Soon Levi’s case takes unexpected twists and turns while Dominic is pursuing the internship with Kate McBride’s private detective agency. I really like that Dominic listened to Levi ( and to himself) and decided that he wanted to not do bounty hunting anymore and decided to throw himself in becoming Private Investigator. In fact I really enjoyed a lot of Dominic and Levi’s interactions. I think the author found a balance here that really appealed to me.

The men may not have shared all their secrets and issues with each other, which made sense, because literally their relationship was only few months old, but the more time they spent together the more they did talk. Those may not have been the longest conversations, but somehow I felt that the men did open up to each just enough for me to believe that two guys who had been dating for few months may share that much stuff.

And I thought the author also achieved the right balance (for me) in making both Levi and Dominic flawed, but so very likeable. If I were ever to choose great romantic leads these guys would fit the bill to the T for me.

The development of the relationship takes place amongst all the investigative action. Levi investigates murder/s, Dominic while interning at private detective agency gets to participate in the investigating allegedly cheating spouse. I doubt anyone will be surprised that at some point their cases collide.  We also should not forget that Levi does not believe that Seven of Spades is dead and apparently neither does Dominic. Since this is only a second book of the series, I do not think I will be revealing any surprises when I say that our super intelligent killer is indeed not dead.

This brings me to my main annoyance with these books so far and that would be the same annoyance that I have had with the first book. Here it goes. To me it is glaringly obvious who the Seven of Spade is. When I read the mystery even with the prominent romance storyline, I want to enjoy figuring the puzzle; I want the author to leave me some clues, to tease me with the red herrings candidates. That’s part of the pleasure of reading the mystery.

After the first book I hold a small hope that one of the characters would at least end up being a red herring. Alas, the author had to go and state that this person could not be one because they were present during the time when the Seven of Spades called Levi on the phone. Huh. I would LOVE to be wrong, but unless the killer will be introduced as a new character ( which to me would be hugely dissatisfactory and cheating the reader), I just don’t see who else could be Seven of Spades besides the person I now very firmly pegged as one.