I enjoyed it but it did not knock my socks off 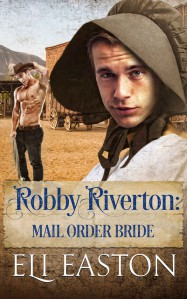 Being a fugitive in the old west shouldn’t be this much fun.

The year is 1860. Robby Riverton is a rising star on the New York stage. But he witnesses a murder by a famous crime boss and is forced to go on the run--all the way to Santa Fe. When he still hasn't ditched his pursuers, he disguises himself as a mail order bride he meets on the wagon train. Caught between gangsters that want to kill him, and the crazy, uncouth family of his "intended", Robby's only ally is a lazy sheriff who sees exactly who Robby is -- and can't resist him.

Trace Crabtree took the job as sheriff of Flat Bottom because there was never a thing going on. And then Robby Riverton showed up. Disguised as a woman. And betrothed to Trace’s brother. If that wasn’t complication enough, Trace had to find the man as appealing as blueberry pie. He urges Robby to stay undercover until the danger has passed. But a few weeks of having Robby-Rowena at the ranch, and the Crabtree family will never be the same again.

Damn, what a kerfuffle. If only Trace can get rid of the fugitive while hanging on to his own stupid heart.

I was looking for a historical romance to read and somebody at my GR group recommended your book .  I have read a lot of your stories before and liked them more often than not and the blurb sounded like a hoot so I dived in.

First and foremost readers please beware - despite some suspense moments which made sense based on the blurb, the book was first and foremost a romantic comedy to me.  Which was perfectly fine and I was pleased that the humor worked for me, I just don't want anyone to form incorrect expectations if they decide to try this one.

The blurb describes the set up very well. Robby Riverton who worked his ass off to get where he was at his career accidentally witnesses a murder.  He also has a bad luck to be seen by the two gangsters who commit said murder.

Pretty soon Robby realizes that the gangsters are looking for him and he has a good sense to run and RUN.  He runs very far from New York as blurb tells you , unfortunately he was being followed almost as far as he runs . Weird events allow Robbie to transform himself in the mail order bride and Trace Crabtree who is the sheriff of the town Robbie comes to saves him from his pursuers while Robby was already presenting himself as Rowena.

Lucky for Robby he gets to stay alive and meet a handsome sheriff.  Unlucky for Robby sheriff saw a Wanted poster for Robby and pretty quickly (very early in the book) figures out that Robby is Rowena and confronts him with that revelation.

Trace manages to convince Robby to stay on his family's ranch as fake mail order bride for one of his brothers till the danger to Robby could be dealt with and Robby reluctantly agrees.

Note all that I just described covers the very beginning of the book, most of the book is the hilarity that ensues when Robby has to interact with the Crabtree family (Trace's father and his three brothers and the two wives - one brother is still not married) and some additional suspense at the end when mobsters come for Robby again.  Oh and of course there was some romance.

I thought that Robby was a *great* character. The guy who did all the menial jobs at the very beginning of his acting career and who had enough talent to actually advance on New York stage and who no doubt would have become a big star had the fate not intervened.

But what impressed me the most was how Robby manipulated the Crabtree guys in the best way possible and helped them to become better human beings.  I was so impressed because I usually really don't care for the manipulative characters, but Robby was just so charming and had the best intentions and he won me over.  Robby at the ranch is the major part of the book so I really don't want to discuss the details of his stay, since I consider this part to be spoilers, I will just say that I found the events that occurred before the last part of the book to be quite funny.  Of course humor is subjective and I cannot guarantee it will work for you, but for me it will.

Sadly I was underwhelmed by the romance between Robby and Trace.  As I said before, I really liked Robby and Trace was a sweet guy too even if he was not as impressive as Robby to me  ( As my friend said Robby dominated the book anyway), however for the longest part of the book I just did not see them being in love. Maybe it was the point that they were falling in love and at the end we could see that they both liked each other as people and not just were in lust. I don't know.

Oh and another thing I found underwhelming was Robby's "let's be stupid" final moment. Yes I get that the author tried to justify it, no it did not quite work for me.