Lost Along the way 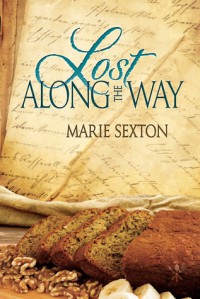 Three months after losing his parents in a car crash, Denver weatherman Daniel Whitaker returns to Laramie, Wyoming. It’s bad enough dealing with the death of his parents and his failing relationship of fifteen years, but when he finds his childhood home full of clutter, Daniel is at a loss. He enlists Landon, his parents’ sexy neighbor, to help him sort through the mess.

I really missed her writing. And the writing in this novella is beautiful, I would even say refined. Daniel's grief from sudden loss of his parents with whom he only started to repair the relationship is so palpable you can feel it from the page. And the unraveling of the fifteen years relationship with his husband feels so real that I was a bit depressed.

But the writer of course cannot let the m/m story to be completely depressing (and I am not complaining on one hand, do not get me wrong). On the other hand as beautiful as his scenes with Landon were, sexual and not sexual,  I felt that it was rushed. And not only that, we get magic cookbook. No, really we do - with recipes inciting passion and helping to grieve and *other stuff*. People I love magic - I gobble up so much of fantasy books with magic playing major role. Here I felt that the book was , whats the correct expression? Magic McGuffin? Something like that - because we don't have enough page space to let Daniel grieve his broken heart and his parents, we will get soup and banana bread  *to speed it up* and for him to feel reborn. Sorry, I went into eye rolling mode and same with his poor ex being forced to spell how he feels and erm some other moments.