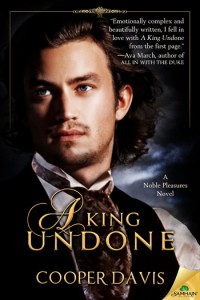 REVIEW WAS ORIGINALLY POSTED AT DA, I purchased the book.

Sometimes you have to risk everything, to follow your heart…

In a world where gentlemen openly court and marry fellow noblemen, the threat of scandal still lurks behind every velvet drape for kings and princes. Such has been the fate for King Arend Tollemach, forced to sacrifice his heart on the altar of regal duty.

Now that his wife is dead and his royal obligations are at an end, he’s ready to take an unthinkable risk. King Arend seeks a concubine from Temple Sapphor, a secretive, gated world where he will finally shed his virginity—as least as it pertains to making love to a man.

Julian never thought he’d spend ten years on the temple shelf, passed over again and again. Just when he despairs of ever finding placement in a nobleman’s bed, Arend walks into the temple. A lonely eyed, beautiful king who could easily steal his heart.

Arend discovers he has no problem opening his bed to the exquisite concubine. The problem lies in finding the key to his long-shuttered heart.

Warning: Contains a beautiful, virgin king desperate to bed another man, a concubine who fantasizes about being claimed and revered by a strong monarch, and a sea of scandal set against a sensual, palatial backdrop.

I preordered your book on Amazon months ago, because I missed your writing, which had not appeared for a while, and I was looking forward to your new work. Unfortunately I discovered that either my memory of your writing was incorrect or my tastes have changed significantly, because when I finished the book I was very disappointed.

The blurb gives a decent summary of the book’s set up. In his youth, King Arend was forced to abandon his first love, Prince Darius, and had to endure years of a loveless marriage. Now that his wife is dead and his son is married (to another prince), he wants to obtain a Concubine from the temple to teach him the art of male sex.

Arend has to fill out a lengthy questionnaire about what he is seeking in his Concubine, which includes answering the question of whether he would be willing to make their relationship more lasting at the end of the contract’s term. Eventually he goes to the temple and chooses Julian.

I really wanted to like this book – both guys seemed sweet and gentle and incredibly lonely. Arend had been trapped in a loveless marriage, and Julian had been in the temple for ten years, because for some reason no one had chosen him until the king arrived.

Unfortunately, I felt that something was off early in the book. I understood that Arend was supposed to be an example of the conflict between the duty and love, but the conflict was not believable enough for me. Apparently in this society, marriages between two men are freely allowed, they are just frowned upon amongst the aristocracy. However we then learn that plenty of concubines end up being married to aristocrats after their contracts expire, so the angst Arend endured seemed to me to be a little fake, if that makes sense. Yes, I understand that there was a line of succession for him to preserve, I get that, but it seems to me that all he had to do if he wanted to pursue true love is give up the throne? And maybe not even that. I know we have his scheming Council, which threatens to do barbaric things to his son-in-law, but I just had trouble feeling all the angst when Arend actually *has* son- in- law. It is not as if their society is opposed to marriage between two men for religious reasons or *any* consistent reasons.

And what was going on with the Council in the first place? I was not clear whether the monarch is a figure head and the Council has the actual authority, or Arend is the one who can issue laws and actually is in charge? Because them threatening Arend in the middle of the book felt out of nowhere to me; however I may have misunderstood the extent of their authority.

Let’s talk about the relationship now. I cannot tell you how much I wanted to love these guys, because as I said above both men seemed gentle and kind. The romance seemed like a slow burn push and pull building of the relationship – except some descriptors felt like they could have appeared in Barbara Cartland’s novels. I have nothing against Barbara Cartland. I loved her books when I was a young teenager, when I was buying them for my grandmother and reading them too. But there is a reason why I abandoned these romances when I was a young teenager – eventually they felt too much and over the top.
Here are some examples of what I mean.

“Alas, Julian possessed yet one more quality that Darien lacked: He was alive. In fact, no man could possibly be more alive than Jules, with his radiant smiles and shimmering – bright eyes and all that passion, lurking just beneath their politely constrained interactions. Once they fell into each other’s arms and tupped, bright sunbeams would likely shoot from man’s fingertips and bolts of lightning from his toes. Julian was that alive.”
“He loved both pleasures equally, but if pressed, he would shyly admit that the thought of feeling his lovely king’s tight, sweet depths was more arousing than any daydream he’d dared think up in his life”.
“He’d seen it moments earlier, of course. Practically kissed the gorgeous, hardened length, and it had all but kissed his chin with damp beads of desire”.

I also wonder why Arend was constantly referred to as a virgin. I am pretty sure that once you have a son, you are not a virgin. Actually I am pretty sure that once you have had sex with anybody you are not a virgin, but I am also used to the “unless you have had anal sex” you are a virgin,” which romance novels claim so often, so I am even ready to go along with that. But he had a son and while it is clear that his wife did not care about what Arend wanted in bed, I thought that they had sex more than once. Whoever wrote the blurb made sure to specify Arend’s virginity “at least as it pertains to making love to a man,” but I wish the story had not used the term at all. And, of course losing this blessed virginity is the high point of their relationship.

“He was inside Julian, deep as a man could go within his beloved. Nothing separated them, not now. They were one in every regard. Lovers.
” I…I have given you my virginity,” Arend murmured in amazement.
“A man’s finest gift. I am honored beyond words””

This is book one of a series and it has a strong HFN ending, so you can read it without worrying that you will be left with a cliffhanger if you don’t go on to the next installment. I will not be continuing with the series, though.